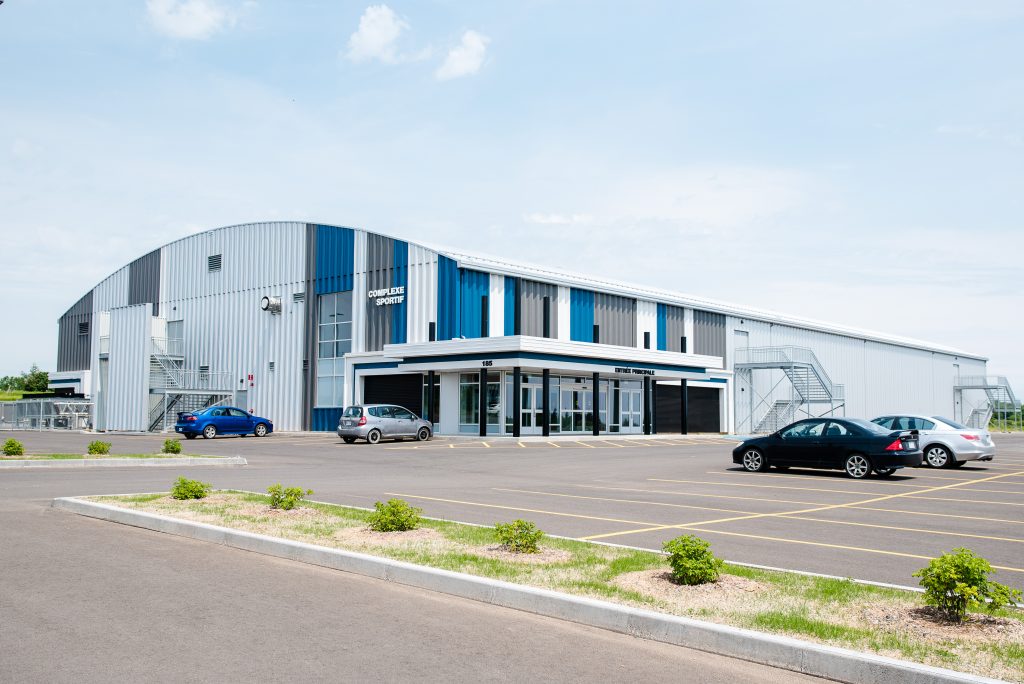 Renovate or start afresh? The City of Paspébiac on the Gaspé Peninsula was faced with this dilemma concerning its arena. Built in the 1970s, it was due for a major facelift.

Rémi Witthom, previously a municipal counsellor and the former city representative for the sports complex project, agreed to get the ball rolling for the construction of a new sports complex worth 8 million dollars.

Witthom explained that the initial step involved having experts such as engineers and inspectors analyze the existing arena to find out whether elements such as the structure and plumbing were still in acceptable condition. Following this analysis, the inspection showed that renovating the building would cost between 10 and 11 million dollars. Put off by the high price tag, the municipality decided to issue a performance specification document, establishing its own budget, in order to explore the possibility of building a new arena.

With an eye to choosing a personalized type of structure, Witthom and Christian Bourque, Paspébiac’s recreation director, visited many arenas in the surrounding areas. “We went to Carleton, Mont-Joli, Matane, Sainte-Anne-des-Monts, Amqui and New Brunswick. We wanted to look at the size of the rooms, the width of the corridors, the spaces for spectators and the type of lighting used. In addition, we were able to sound out arena managers and recreation department officials about what works well and what could be improved in their respective buildings so that we could have a perfect arena.”

The municipality’s goal was to successfully erect a new building costing eight or nine million dollars. “With this budget, we would be able to have all the features that we would have had if we had decided to renovate the infrastructure. Our requirements were clear: we wanted a complex with seating for 800, a food court and washrooms.”

The municipal administration then asked the companies that bid on the construction of the new complex if they were able to build a new arena with a budget of $8,125,000. “The fact that we received bids meeting our criteria was confirmation that a new build was a lot more cost-effective than a renovation.” As part of this project, the municipality benefited from a financial contribution from the provincial government, which amounted to 4 million dollars. The balance was assumed by the city and its taxpayers.

Once the municipal administration decided to go forward with the construction project, it organized a meeting with the citizens of the municipality. “We put together a slide show to show taxpayers the condition of the old building, which allowed them to see that it was in poor shape. We then created a table explaining the new sports complex construction project and its impact on their tax bills. We were talking about an increase of approximately a hundred dollars,” recalled Whittom.

He added that the audience was free to ask all the questions they had related to the project. To be able to respond appropriately to all queries, several professionals took part in the meeting, including an engineer, a city official and representatives from the local figure skating community and from the companies LFG and Honco (see the technology). “There were about a dozen people on hand ready to present the project to the public. Transparency is key to the successful acceptance of a project that has an impact on citizens’ pocketbooks. We wanted the public to have all the facts,” affirmed Whittom, emphatically. The construction of the sports complex was launched in August 2016 and was completed in the spring of 2017.

Rémi Whittom made sure that the construction of the arena went off without a hitch: “I worked with a colleague to draw up plans to have them issued as a performance specification. I had an opportunity to meet with employees of the companies LFG and Honco and had weekly meetings with them to avoid any problems during the different construction phases.” He added that major problems arise less frequently during new builds compared to building renovations where there can be unpleasant surprises that lead to cost overruns.

As for the projected usage of the arena, Witthom noted that the old arena was used to full capacity after school hours and on weekends for hockey, figure skating and other activities. As a result, he was convinced that the infrastructure would see heavy use. “We told our citizens that it would be a multi-sports building and that it could be used year-round. To this end, we took advantage of the grant to buy multi-sports flooring. When the ice is removed, we can install tiles that allow users to play tennis, ball hockey, badminton, basketball and volleyball. In addition, a room was built inside to allow citizens to take karate, dance and yoga classes.” 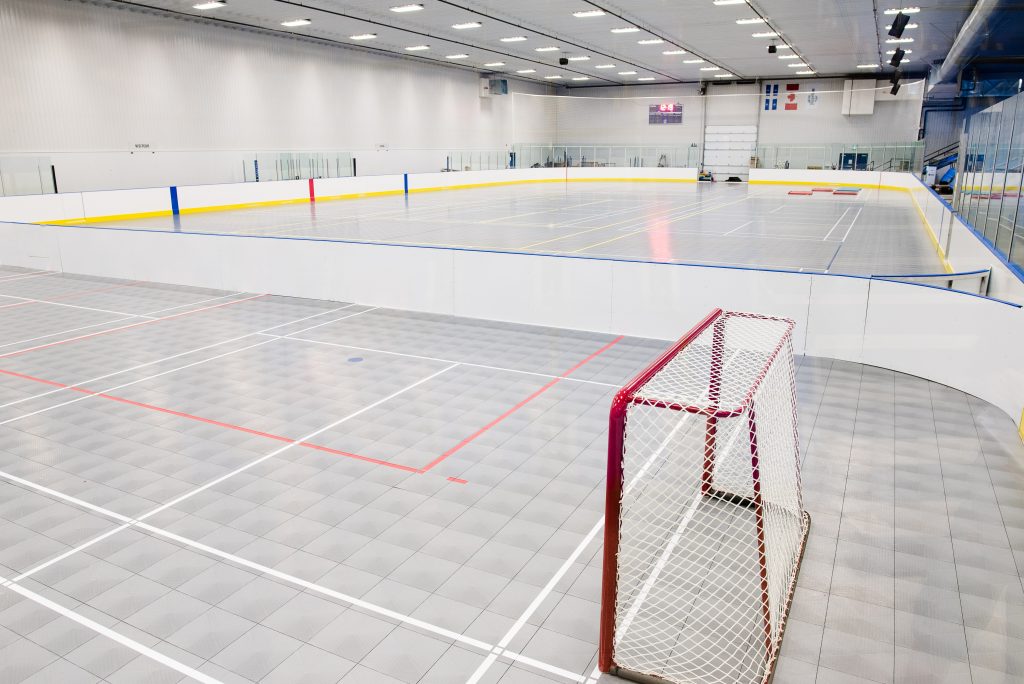 The City of Paspébiac manages the building. “It has been successful in every respect and the public has made it their own,” concluded Whittom.

Technical details of the sports complex :

A different strategy at Cégep Garneau

This Quebec City college with a student population of nearly 8,000 renovated its sports centre at a cost of nine million dollars, receiving funding to the tune of seven million dollars from the Ministère de l’Éducation et de l’Enseignement Supérieur. In a press release, executive director Denise Trudeau expressed her gratitude for the financial support provided by the government. In her opinion, sports at Cégep Garneau is a niche of excellence. “We’re proud to offer our students the possibility of pursuing their passion here in an upgraded sports centre.” The work began in the spring of 2018 and is expected to be completed in 2019.

Built in 1982, the building needed a serious facelift. The work involved, among other things, renovating the pool, redesigning the showers, locker rooms and several other rooms, restoring the exterior cladding, replacing the roof of the building and redesigning the Élan football team’s locker room. According to Métro Média journalist Jean Carrier, the athletes’ quarters were centralized and a weight room designed to meet the specific needs of the football players was annexed to the locker room. In addition, the coaches’ offices were revamped and the locker room now contains a physical therapy room and video room.

Cégep Garneau sports coordinator Éric Lavigne mentioned to Radio-Canada journalist Jean-Philippe Martin that the swimming pool’s air-conditioning and water quality control systems, as well as the pool deck benefited from the investment. “People are going to think that it’s a new pool inside the existing facility,” Lavigne said to Martin. According to the newspaper Constructo, Cima+ (engineering) and CCM2 (architecture) created the drawings and specifications and the renovation work was carried out by Les Entreprises QMQ. 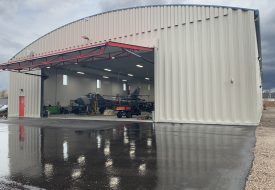 Lortie Aviation and Honco: Continued Collaboration Through the Years

Lortie Aviation and Honco Buildings have been business partners for several years.

The Centre Multisport Desjardins: a Building Appreciated by Everyone

Some people claim that the number 13 is synonymous with bad luck.