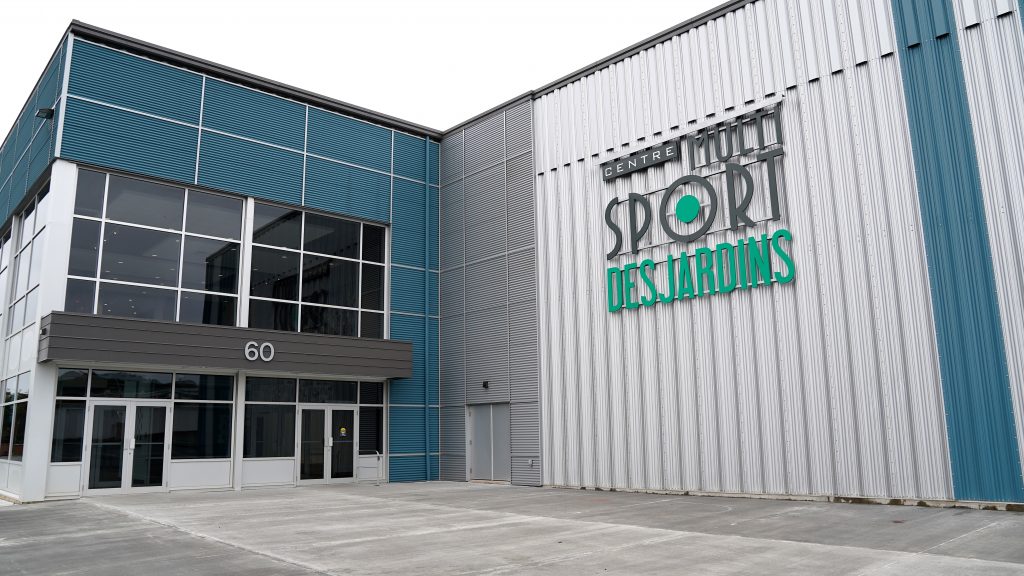 Some people claim that the number 13 is synonymous with bad luck. In the case of the Municipality of Étang-du Nord on the Magdalen Islands, this number represents the completion of a project that had been anticipated for 13 years: the construction of a new sports complex. The dream finally became a reality in October 2019 when 1,200 people attended the official opening of the Centre Multisport Desjardins, a $15.9M building built by the Honco Group. The sports and outdoors director of the Municipality of the Îles-de-la-Madeleine, Vincent Leblanc, was happy to talk with us about how this project came about.

To begin, Leblanc recalled that this construction project had generated considerable debate since 2004 at both the community and political levels. Two years later, in 2006, the municipal administration decided to close the Wendell-Chiasson Arena in downtown Cap-aux-Meules. Following this, studies were commissioned to find out whether the two other arenas in the area should be renovated or whether the better option for the long term would be to build a new arena.

Because the municipal council was unable to reach a consensus on this matter, a referendum was held in November 2015. Citizens had to choose between the construction of a multisports complex with two ice rinks or renovations to the arenas in the villages of Fatima and Havre-aux-Maisons. The result of the referendum was 68% in favour of a new building on the Magdalen Islands despite the slight tax hike ($49) taxpayers would have to bear. The referendum saw a 44% participation rate. The public got involved in the project and $1.5M was collected to finance it. In an article dated April 3, 2018, the newspaper Journal Constructo stated that the project received funding from the small community component of the Canada-Quebec New Building Fund program (Fonds chantiers Canada-Québec), and that it benefited from equal contributions from all three levels of government.

In an interview with Radio-Canada in 2015, Jonathan Lapierre, the Mayor of the Magdalen Islands, said that he was satisfied with the participation rate of his fellow citizens. He admitted that the project had caused a good deal of friction in previous years and that his goal now was to win over those who had resisted the project. For her part, during the radio interview, Chamber of Commerce president Guylaine Cyr said that residents were interested in having facilities that better met their needs.

A steering committee working on the amphitheatre project met in 2016 and hired a firm to produce a performance specification. “For our part, we visited arenas to get ideas, while at the same time working closely with the Association québécoise des arénas et des installations récréatives et sportives (AQAIRS). We received a document from the AQAIRS detailing the factors to take into consideration when building a new arena so that we could properly develop our concept.” Leblanc added that a local advisory committee made up of members of different ice-sports-related associations was formed. “Several meetings were held and we took the comments made at these meetings into consideration so that our project would meet everyone’s needs as well as our initial budget.” 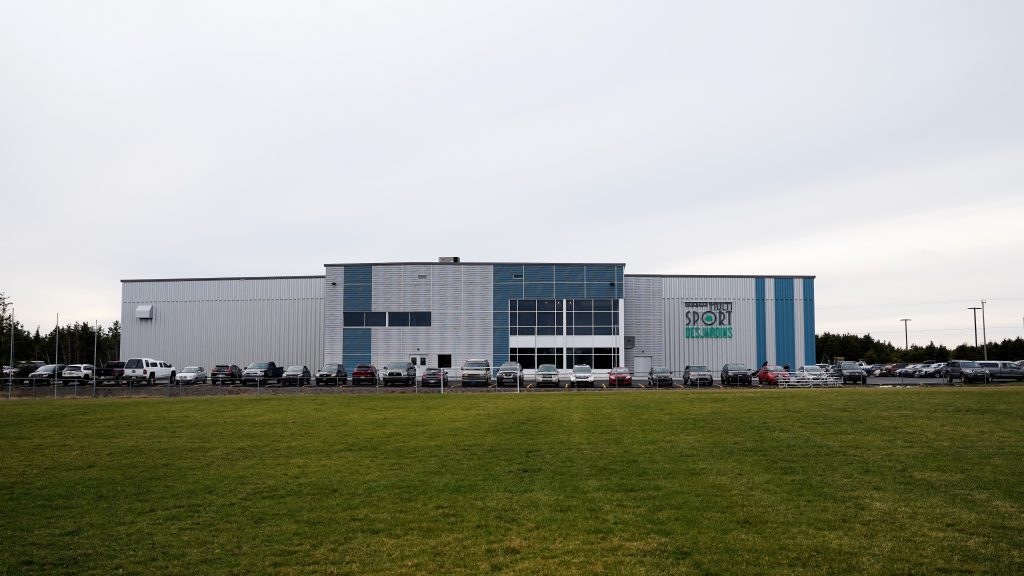 Once they received the performance specification, the municipality launched the tender process for the construction of the building. “We wanted a complex with two ice rinks. Also, because the project had not received the unanimous support of the public, the goal was to have a multi-purpose facility that could be used year-round by different types of users. As a result, we have a multisports surface, an indoor track for running, walking and training and a restaurant. We wanted it to be a convivial place that would draw people to the arena. We wanted our arena to be a meeting place for people of all ages,” emphasized Leblanc.

The stands of the main ice rink provide seating for over 800 and have a 1,200-person capacity when standing spectators are taken into account. The other ice rink has no seating, but can accommodate about a hundred standing spectators. The walking track is located on the second floor, circling the secondary ice rink, forming “a mezzanine surrounding the rink,” according to Leblanc. 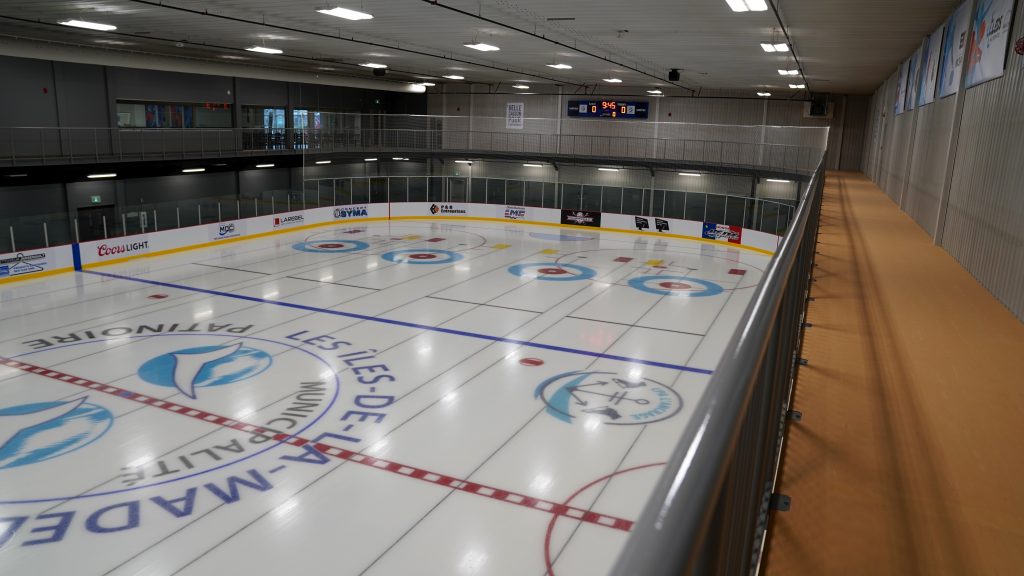 The sports complex has a spacious, multi-windowed lobby. The Centre also boasts 11 rooms of different sizes for use by coaches, referees and players, with a separate room for female players. 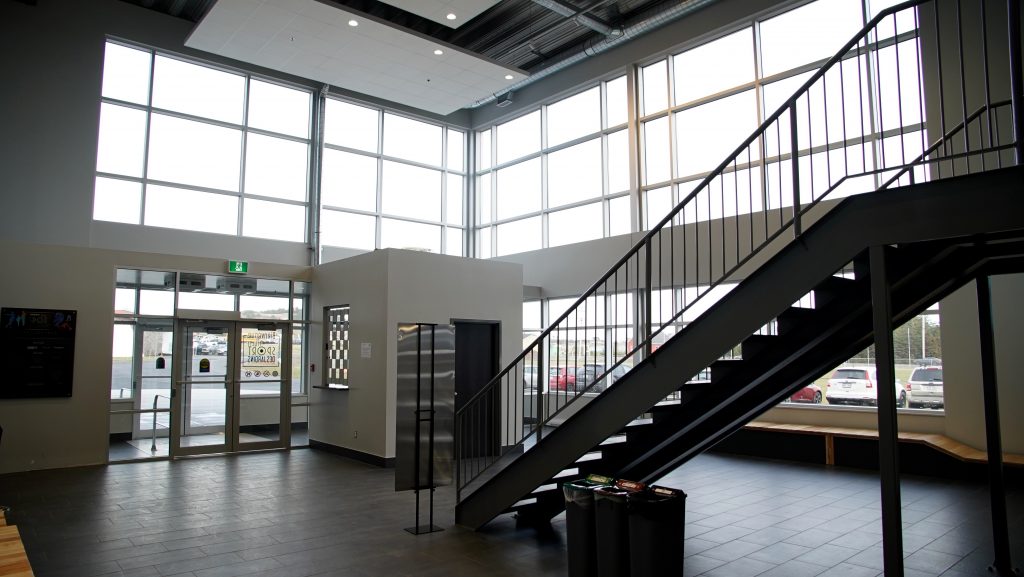 The Centre Multisport Desjardins also has an indoor snow-melt pit for the resurfacers and a spacious VIP lounge providing a view of the main ice rink. In addition, according to Radio Canada journalist Jean-François Deschênes, a heat recovery system is used to melt the snow collected by the resurfacer and preheat public spaces. Another of the Centre’s innovative features is the special flooring on the running track added to prevent injuries in runners.

In April, one of the ice rinks will be closed and the municipality will install its multisports surface to allow people to play indoor soccer, badminton, hockey ball, tennis and volleyball. A month later, the main ice rink will also close. Because the municipality has no major entertainment venue, shows will be presented there.

The sports and outdoors director of the Magdalen Islands, Vincent Leblanc, recalled that many companies manifested their interest in building their new arena. A dozen companies from nearly everywhere in the province submitted bids. “With their self-supporting building concept, Honco offered a competitive price. The company handily won the bid with our point system. In addition to the financial aspect, Honco presented a project that met most of our criteria in terms of quality and needs. Our experience working with them was very positive and our building is a great success.”

The ground was broken in June 2018 and the building was officially opened on October 17, 2019. “Honco completed the project on schedule. We had a great collaboration with the company. Despite the fact that we are located in a remote area, Honco rose to the challenge brilliantly during the different phases of the project. To give you an example, the company did a great job handling the logistics involved in transporting material by ship.” According to Leblanc, there were no major problems during the construction of the complex.

To date, Leblanc is pleased with how the public has responded to the new building since it opened. “Everyone thinks the complex is wonderful. Even those who resisted the project love the new arena. There’s definitely a lot of excitement about our facility. It’s really great and we’re going to keep developing activities to get even more people involved,” he asserted.

Taking ice time only into consideration, 1,500 people use the arena every week, which represents 3,000 hours of ice time per year. “We have a development vision, and usage of the building will be doubled. We hope to provide a diversified range of activities. With the running track alone, we are already seeing an increase in traffic. The same holds true for our drop-in public skating sessions, which are very popular.”

General Characteristics of the Centre Multisport 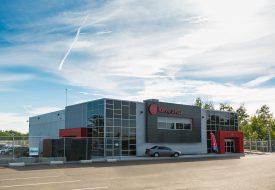